The Horizon Problem for Faster than Light Travel 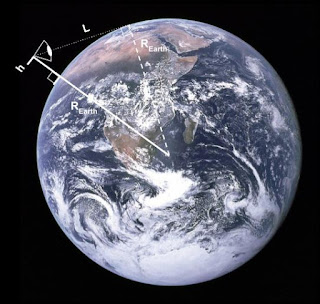 Hello all, As I have mentioned in previous posts, a major hurdle for autonomous FLT travel is the horizon problem. But what is a horizon? Is it some single well-defined concept or a catch-all term for many phenomena? In this post, I present some thoughts on horizons in general relativity theory and their implications for FTL travel using warp drives. A horizon is a limit to the region that can be observed or communicated with in a space. On Earth, horizons can be used to refer to edge of what can be seen when looking out over a vast body of water like an ocean. The limit to what can be seen in this case is caused by the curvature of the Earth's surface and is a cute problem to calculate how distant the horizon appears given the height of an observer above the surface of a spherical Earth (ignoring effects of the Earth's atmosphere) that is straightforward to solve as it is embedded in a Euclidean geometry.  An observer looking out to the Earth's horizon from a height h abov
18 comments
Read more

December 07, 2021
Hello All, In this post I log some thoughts on another proposed challenge to superluminal warp drives: acceleration of the soliton past the speed of light. In their paper published earlier this year, Bobrick and Martire ( Introducing Physical Warp Drives ) state on page 17 of their pre-print that one cannot accelerate a subluminal warp drive to superluminal speeds for similar reasons as why one cannot accelerate masses moving through space-time to superluminal speeds: Warp drives can move superluminally only in the same sense as any ordinary inertial mass, test mass, or any other object. Namely, there is no known way of accelerating regular material beyond the speed of light. However, one may postulate a test particle which moves faster than light in relativity, in which case it may continue moving inertially. In the same way, a s warp drives are shells of material, there is no known way of accelerating a warp drive beyond the speed of light. However, one may also postulate the warp
17 comments
Read more

November 26, 2021
Hello All, I have received dozens of emails in the past months asking me for what essentially amounts to a warp drive course curriculum.  This post contains a list of background reading I would recommend for those interested in studying and researching warp drives. Many technical topics have contributed to my research in this area so far, but I will narrow my selection to those that were the most useful in the research that led to  Breaking the Warp Barrier  (also at https://arxiv.org/abs/2006.07125v2 ). These works are written at or above the level of upper undergraduate studies in physics or mathematics. Some of the text books are expensive, but may be available at your local library or through an inter-library loan (WorldCat links  provided). Where available, links to freely available pre-prints are provided in addition to journal links for research articles. I may expand on this list at a later date as my work in this area expands. Text Books: A First Course in General Relativity
3 comments
Read more

June 13, 2021
Hello All, I was on The Judgement Call Podcast with Torsten Jacobi recently. The recording can be found on the podcast website ( https://judgmentcallpodcast.com/2021/06/94-erik-lentz-how-to-build-an-actual-warp-drive/ ) and YouTube ( https://www.youtube.com/watch?v=ZYBD5z_LDSQ ). We touched on a number of topics, including faster than light space travel, extra dimensions, the simulation hypothesis, and non-local phenomena. Torsten was an engaging host and, while I am not an expert on every topic we discussed, we had fun exploring possibilities. Have a great Sunday, Erik
13 comments
Read more

May 11, 2021
Hello all, I was pointed to a paper that appeared on the arXiv yesterday ( https://arxiv.org/abs/2105.03079v1 ). I am glad to see people taking a close look into my paper ( https://doi.org/10.1088/1361-6382/abe692 , and the latest arXiv version https://arxiv.org/abs/2006.07125v2 ) and the other recent papers on the topic of warp drives ( https://doi.org/10.1088/1361-6382/abdf6e ,  https://arxiv.org/abs/2104.06488 ). I have also been contacted in the last months by several other researchers working to reproduce and expand upon my results. I wanted to make a running post on this paper and a series of posts on other appraisals of my work in this field and the resulting discussions. After reading through their entire paper, I noticed that this new manuscript seems to have overlooked my complete discussion of the weak energy condition (WEC) contained in my published paper, instead referring to an early arXiv manuscript that tracked quantities of energy, momentum, etc. in only an Eulerian f
24 comments
Read more

April 10, 2021
Hello all, An article about my warp drive paper came out recently, and I wanted to share it here. The article provides some further commentary made by other physicists about my paper, so it gives a better sense for where the topic stands among physicists. I was interviewed for this article and thought it was well done. Here you go: https://academictimes.com/this-design-for-a-faster-than-light-warp-drive-is-making-waves-but-physicists-disagree-on-whether-its-possible/ Happy Saturday, Erik
4 comments
Read more

Review and Response to Bobrick and Martire 2021

April 07, 2021
Hello all, I have received quite a few requests by email, interview, reddit, social media, and even this blog for a response to the paper "Introducing Physical Warp Drives" (IPWD) by Alexey Bobrick and Gianni Martire (https://doi.org/10.1088/1361-6382/abdf6e). There has also some confusion about the difference between the papers. This paper came out very near to my own 'warp drive' paper (Hyper-Fast) and in the same journal, Classical and Quantum Gravity .  This post addresses questions I have received about IPWD and its reference to an unfinished version of my own paper. Suffice it to say, I am somewhat disappointed in their assessment. For ease of access, I will be working from the most recent  arXiv version of IPWD (https://arxiv.org/abs/2102.06824v2). For disclosure, I have been in contact with the authors since July 2020 when I gave a virtual seminar on my own paper to CENTRA (Center for Astrophysics and Gravitation) in Lisbon, Portugal ( https://tecnico.ulisboa.
1 comment
Read more

March 25, 2021
Hello all, As mentioned in an earlier post, on March 9 there was some activity on /r/science on the press release for my warp drive paper ( https://www.reddit.com/r/science/comments/m1gyyi/breaking_the_warp_barrier_for_fasterthanlight/ ). Several questions  came up that I thought required some follow-up. So instead of outing myself on Reddit, I will address here those questions that I can answer quickly. Others might appear in their own posts in the future. 1) Phonons as a source of negative mass: Theories of phonons (essentially density waves in a medium) can be described as an effective (quasi-)particle field with negative mass in the sense that they are repelled by gravitational fields of massive bodies such as the Earth. Examples of phonons include the sound waves in air, or most any other pressure/density waves over a massive, elastic, and nearly homogeneous medium. ( https://en.wikipedia.org/wiki/Phonon ). However, phonons are not likely to provide the "exotic matter"
Post a Comment
Read more

March 14, 2021
Hello all,  I wanted to write a short post to acknowledge the first online article I found to talk about my hyper-fast soliton work. Back in November, long before the press release while my manuscript was still under peer review, Dr. John Cramer wrote a perspective on my paper in his long-standing science column "The Alternate View" in Analog: Science Fiction and Fact Magazine . John also happens to be professor emeritus at my own Ph.D. institution, the University of Washington. You can find the article in the archives of the Analog website ( https://www.analogsf.com ). John also keeps a repository of his past articles at UW where the "The Lentz Soliton FTL Drive" can be found  ( https://www.npl.washington.edu/av/altvw209.html ). While there, you can also check out his other columns ( https://www.npl.washington.edu/av/av_index.html ). Have a good Sunday. Erik
1 comment
Read more 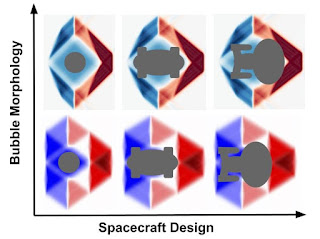 Hello all, As mentioned earlier, I was invited a few months ago  by a colleague at Embry-Riddle Aeronautical University in Prescott to give a live talk about my work. This is my alma mater, and I am happy to "be back", even if it is just virtually. Here is a summary of my upcoming talk: Solitons in space–time capable of transporting time-like observers at superluminal speeds have long been tied to violations of the weak, strong, and dominant energy conditions of general relativity. The negative-energy sources required for these solitons must be created through energy-intensive uncertainty principle processes as no such classical source is known in particle physics. This talk presents an approach for overcoming this barrier, explicitly constructing a class of soliton solutions that are capable of superluminal motion and sourced by purely positive energy densities. Location: Jim and Linda Lee Planetarium (virtually through YouTube) Time: 12:00 PST (please check the link for y
4 comments
Read more
More posts